Posted on: 20/05/2014, by : PYC Web Admin
Gosport to Lyon – week 2:  Paris to Briare.
A wet weekend in Paris.
Sunday morning in Paris brought more showers with tantalising glimpses of the sun. With the bill paid and the water tank topped up we slipped out of Arsenal Marina in time to catch the one-way system and give Jo a boatman’s tour of the Isle de la Cite and the Notre Dame. As we completed the circuit the heavens opened and for about 2 minutes we were swept by torrential rain and hail.  Just long enough to get nicely wet.
As previously reported, we believed that we were starting to master this lock business, but there were still a few tricks to learn. First is called “Read the book” as upon reaching our first lock, we discovered that on

Sundays Monsieur Le Eclusier goes home for lunch between 1230 and 1330. Arriving just about 1300 all we could do is moor up and wait.  Lesson 2 is that on this part of the river Seine they like to put two monster barges in the lock leaving us to follow and moor where we can before the gate closes.  This means that we sometimes have to moor alongside the second barge who is sitting there with just a short bow spring on and his prop turning with the wheel hard over.  Motoring through propwash is something we will now try to avoid!

Overnight mooring in the charming named Port aux Cerises, hot showers but no loo seats and an excellent dinner of Chicken Kellet.
Monday started with promise, but slowly deteriorated in to the showery days that we have come to know.  To make up the hours lost the previous day we made an early start. For once the Lock Gods were with us and at every lock we managed to synchronise with the arrival of a big commercial barge and slide in neatly behind him.  Our Journey was taking us around the deeply forested region of Fontainbleau looking lush and green. A great time to see this beautiful landscape.
Lunching by rotation we pressed on and by late afternoon had managed to find ourselves in a little backwater by the village of Samois sur Seine.

For much of the year this is just a sleepy hamlet of local workers and Parisien country houses. For the last weekend in June however, the place is transformed by the massed ranks of jazz guitarists coming to pay homage to Django Reinhardt who spent the last years of his life here.

Sculpture of Django
For four days you can hear “Limehouse Blues” played in every key and tempo known to man on guitars costing a few Euros to many thousands.   Perhaps mercifully for us this was not that weekend and our overnight mooring on the old lock was peaceful and free.  Dinner in the nearby restaurant was Parisian prices but absolutely delicious.   If it’s any indication of how things are going this was the first night for many months that I have slept without waking. I think that we are beginning to unwind.
Tuesday morning began with the long walk to the top of the village to buy bread and pate. By 0900 we were once more back on the Seine again managing to slip behind a big barge and clear our final Seine lock.Shortly after 1000 we turned to Starboard to leave the Seine behind and start our adventure on the Canal du Loing.

Loing lock
This much more our style. The locks are much smaller and in some cases fully automatic, simply drive in and pull the lever and it all happens for you.  Suddenly life is so much more relaxed, we almost have the canal to ourselves and we glide along through a landscape of fine country houses, forests and occasionally an abandoned factory.  This is rural France as we have never seen it before, the France that you don’t see from the road and we love it.  The canal is interesting. There is currently a huge investment in the infrastructure, eventually all the locks on this canal will be automatic, even the towpaths are being dressed and rolled so that they make a wonderful surface to cycle on.  Now the bikes have come into their own and we take turns to cycle ahead and prepare the lock or mostly just tell the lock-keeper that we are coming.
Eventually we discovered that the lock-keepers phone ahead and in some cases jump into a little van and race off to the next lock to get it ready so that we glide straight in. How much easier can it get?  The only problem is that we don’t know when to stop, there is always the promise of that perfect little mooring just around the next bend, but eventually we call a halt at Souppes sur Loing in an old industrial mooring under the shadow of an abandoned grain elevator.  The sky has cleared and we spend and perfectly peaceful night to the accompaniment of romancing ducks.
Wednesday.  At our last lock the previous day we were asked to declare at what time we would be resuming our journey so that the lock-keeper would know what time to be at the next lock.  Our estimate was “between 0900 and 1000”, but of course we are late. Never-the-less Vincente (for now we are on first name terms) is waiting patiently for us with a bright smile and for the next three locks he is our personal Eclusier. We have become quite attached to him and present him with a small token of our appreciation at his last lock.  His replacement resembles Dumbledore.

Dumbledore
It is a perfect day, the sun is warm and the chill has gone from the slight breeze.  The canal banks are lined with cowslips and buttercups and even the enforced pause at lock-keepers lunchtime is a moment to enjoy a late coffee and croissant and do silly things. 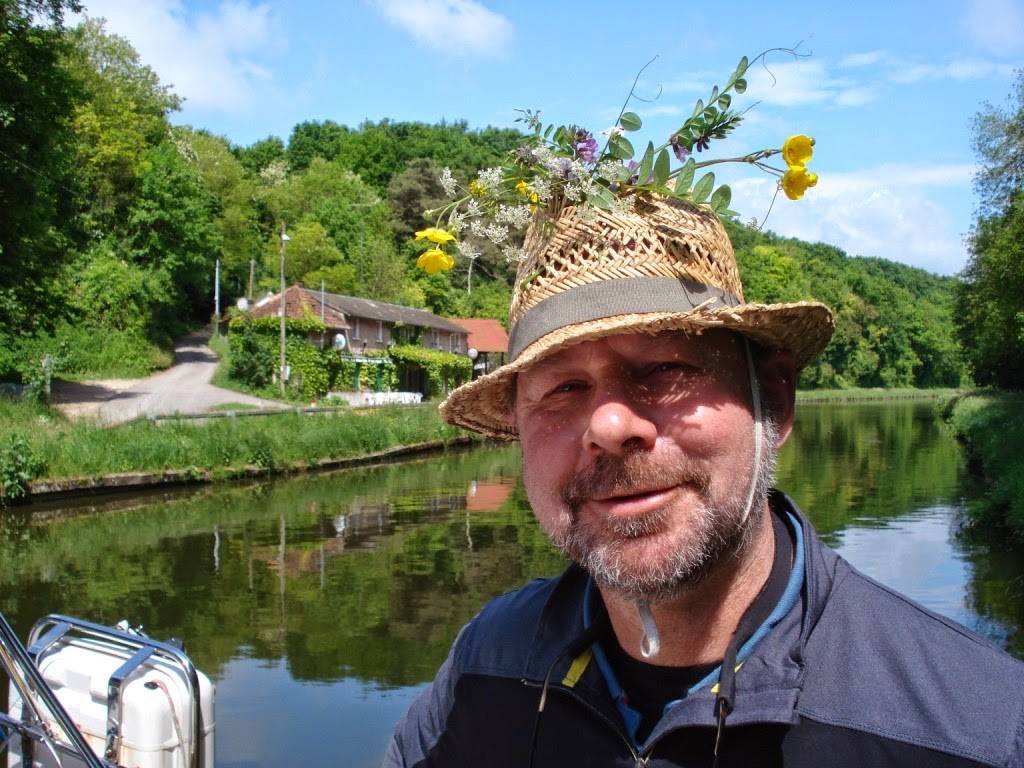 Terry’s hat
By late afternoon we arrive at the medieval town of Montargis.  It’s a fascinating maze of tiny backstreets and waterways. Even Joan of Arc stopped here. A nice way to end a perfect day.
Thursday started cold but the sun soon warmed things up. Our journey to the first lock out of Montargis took us through waterways reminiscent of Venice.

Montargis
Waiting for us was our new “Eclusiere” Michele whose beaming smile belied the bad news that there was industrial action with some of the waterways staff and our passage to Rogny was not guaranteed. Despite this we made steady progress through lush avenues of tall Poplars, Chestnuts and Ash Trees. On either hand we caught glimpses of Chateaux and fine country houses some pristine, some in sad need of repair.
After our previous experiences we had planned to organise our day round French hours and take a 1200 to 1300 break for lunch. Our lock-keeper however advised us to press on and put some speed on to the next lock to join a yacht waiting for the 1300 opening.  We duly arrived but it was not until the second lock that we were joined by a Beneteau 39 on its way to the Med from Switzerland. The owners were old hands at the route but, with their 1.50 draught, they admitted that they had previously encountered problems especially with the Canal du Midi which they described as a “ploughing exercise”.
As we exited the Briquemault lock the sharp-eyed Swiss crew remarked that we did not appear to be discharging much cooling water and true enough a quick inspection of the water filter revealed minimal amounts of water crossing a near empty filter. We gently parked ourselves on the mud at the edge of the canal and soon discovered that the blockage was on the inlet.  Whatever it was released itself with a few operations of the sea cock and soon water was happily gurgling through the filter once more. The delay was minimal, but by then our companions had gone ahead to the next lock and when that closed so did our onward passage to Rogny.  Our friendly lock-keeper was clearly being given some grief by the local union rep and he grumpily advised us that there was no way that we would get through the next lock and our only option would be to moor up here for the night. We cooked pasta and spent a wonderfully peaceful night.  Marooned, still unshowered, but comfortable.

PK 27 mooring
Friday turned out to be a day of triumphs and failures. After a blissfully peaceful night at our imposed mooring, we set to be at our first lock at 0900 and sure enough our man in blue was waiting to see us through.  It was a fabulous morning, the sun strong and warm, so warm in fact that as the day progressed your skipper made the significant step of changing into shorts. Our aim was to reach Rogny with time to take advantage of the showers, take lunch in lock-keepers time and be on our way with a comfortable run to Briare.  And things went well…..sort of.  At Briare there really were showers, we made haste to the Tabac for shower tokens, rushed to the facilities and stripped off ready for that cleansing gush of glorious hot water. Except there wasn’t any.  The important Jeton in the slot did nothing and upon returning unwashed to the Tabac monsieur explained that this sort of malfunction was all too common and duly refunded our money.  However Rogny has better claims to fame than failed showers. King Henri IV had constructed a wonderful set of seven locks to bring his canal down to the level of the Loing waterway. Unfortunately the design was such that there was nowhere for boats to pass in the flight so that they could either all go up or all go down.  Today the magnificent feat of engineering has been replaced by a set of non-contiguous locks which was our next target.

Rogny Locks
Terry and Lenie bought some tasty French pastries for lunch and from our mooring we kept a keen eye on the traffic light that would signal that we could enter into the flight of lock due to open at 1300.  At 1245 two cruisers passed us and manoeuvered around in the windy conditions thus beating us to the first lock. On any other day this might not have concerned us but, as we eventually left the first lock, we were informed that the second lock had now jammed and we would have to wait about an hour for it to be fixed.   With nowhere to moor all we could do is put our fin gently into the mud to keep us in place and do what all Brits do in such circumstances…… have a cup of tea.
An hour later we were once more on our way, but the men in blue were now saying that it would be unlikely that we could clear the remaining 12 locks between us and Briare before the locks closed at 1900.   Undeterred we pushed on. At least the locks were now going downhill and that seemed to make life easier.  With the scent of victory in our grasp we entered the Commercial Port at Briare at 1830, managed to squeeze ourselves into the only available space and sent Terry off en bicyclette to find the Capitainerie and report back on the showers.   He returned 15 minutes later with the good news that we could stay and the bad news that the showers had just shut until 0900 the next day.  No sweet smell of success for us.
Bob Cousins

This site uses Akismet to reduce spam. Learn how your comment data is processed.